יעקובסון אלכסנדר. Elections and Electioneering in Rome: a Study in the Political System of the Late Republic. Stuttgart: Franz Steiner Verlag; 1990 'עמ. 251. 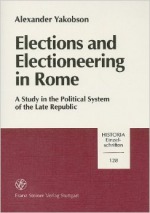 The books analyses the Roman electoral system under the late Republic and its impact on the Republican political system as a whole. The political system of the Republic is often described as narrowly oligarchic; all forms of popular participation had little real impact on how the Republic was run. Though this view has been challenged in recent years, the Republican electoral system is still widely regarded as controlled and manipulated by the narrow circle of Roman nobility (among other things, through patronage). This book offers a very different picture: a wide popular electorate, free to choose between upper-class candidates who fiercely competed for the votes of the populace and had to make great efforts in order to win popularity with the common people. Competitive popular elections influenced the whole balance of power between the common people and the elite. The books refers, by way of comparison, to modern electoral systems and their impact on the relations between the people and the social and political elite.