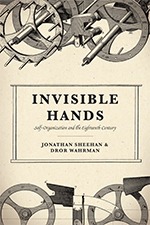 Why is the world orderly, and how does this order come to be? Human beings inhabit a multitude of apparently ordered systems—natural, social, political, economic, cognitive, and others—whose origins and purposes are often obscure. In the eighteenth century, older certainties about such orders, rooted in either divine providence or the mechanical operations of nature, began to fall away. In their place arose a new appreciation for the complexity of things, a new recognition of the world’s disorder and randomness, new doubts about simple relations of cause and effect—but with them also a new ability to imagine the world’s orders, whether natural or manmade, as self-organizing. If large systems are left to their own devices, eighteenth-century Europeans increasingly came to believe, order will emerge on its own without any need for external design or direction.

In Invisible Hands, Jonathan Sheehan and Dror Wahrman trace the many appearances of the language of self-organization in the eighteenth-century West. Across an array of domains, including religion, society, philosophy, science, politics, economy, and law, they show how and why this way of thinking came into the public view, then grew in prominence and arrived at the threshold of the nineteenth century in versatile, multifarious, and often surprising forms. Offering a new synthesis of intellectual and cultural developments, Invisible Hands is a landmark contribution to the history of the Enlightenment and eighteenth-century culture.