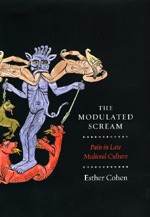 In the late medieval era, pain could be a symbol of holiness, disease, sin, or truth. It could be encouragement to lead a moral life, a punishment for wrong doing, or a method of healing. Exploring the varied depictions and descriptions of pain—from martyrdom narratives to practices of torture and surgery—The Modulated Scream attempts to decode this culture of suffering in the Middle Ages.

Esther Cohen brings to life the cacophony of howls emerging from the written record of physicians, torturers, theologians, and mystics. In considering how people understood suffering, explained it, and meted it out, Cohen discovers that pain was imbued with multiple meanings. While interpreting pain was the province only of the rarified elite, harnessing pain for religious, moral, legal, and social purposes was a practice that pervaded all classes of Medieval life. In the overlap of these contradicting attitudes about what pain was for—how it was to be understood and who should use it—Cohen reveals the distinct and often conflicting cultural traditions and practices of late medieval Europeans. Ambitious and wide-ranging, The Modulated Scream is intellectual history at its most acute.